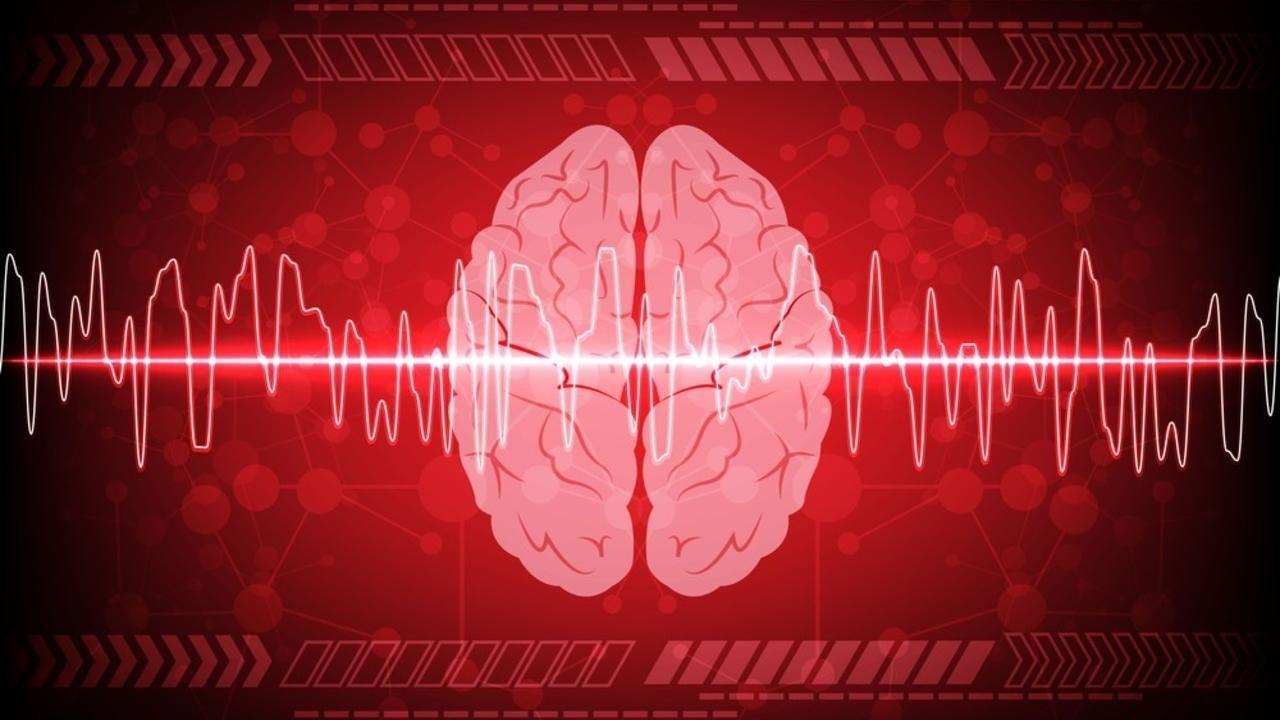 Just think about this:

If you've got a random red light therapy panel from Platinum LED or Mito Red, do you know whether you should use that panel:

In fact, when discussing the science I'll go in-depth into dosing numbers but I'll promise to break those down into easy-to-understand principles.

Note: If you aren’t already familiar with the benefits and science behind red and near-infrared (NIR) light, start with Alex’s excellent comprehensive overview HERE!

My Experience With Red Light Therapy

Ari's book, and the article, go in-depth discussing the proper dosing strategy. He also emphasizes that in addition to getting no benefits if you dose too low, you can also lose the benefits by dosing too high (1).

So the perfect dose is like a golden mean between a high and low dose. In biology, that principle often applies. Just think about how both low and high protein intakes are bad, or low and high levels of nutrients such as calcium and magnesium.

But back to Ari:

The benefits his work focused on were mainly fat loss, strength performance and muscle recovery, immune system health, inflammation, and so on.

But the benefits I, personally, was most intrigued by were improved mood, better brain health and cognitive performance, and a reduction in symptoms of depression and anxiety.

Neither of these articles discussed the proper dosing strategy for the brain. As we’ll see, there are good reasons why they didn’t. It gets complicated applying red light therapy to the brain real quickly!

This obviously means NIR has a better chance of working for the brain than red light. Especially NIR in the range of 650 to 950nm: 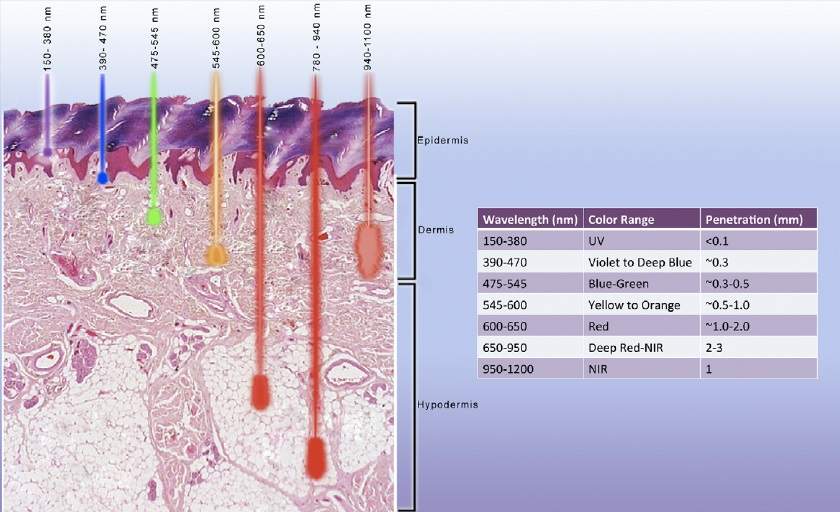 How should you dose NIR light to benefit the brain?

Short answer: the best answers we can give for now involve a lot of guesswork.

“Power density” refers to how intense the light a NIR device spreads over a given area is. It’s a measurement of the strength of the dose delivered by that device. Power density is usually measured in milliwatts per centimeter squared (mW/cm2). We measure the total dose delivered by a session, or “energy density,” in Joules (J)—and the dose to each area in J/cm2.

J/cm2 is calculated by multiplying W/cm2—to get W/cm2, just move the decimal on your mW/cm2 value three places to the left—by the treatment time as measured in seconds.

This means if you know the power density and treatment time, you can calculate the energy density of a treatment.

Or, alternatively, if you know the power density and energy density, you can calculate the treatment time. This is useful to know when you start looking at studies that don’t report all the information clearly.

We can easily measure the Joules a device delivers to the first surface it touches—say, to the surface skin of your forehead. But how much does that mean we’ve delivered to your brain?

We don’t know, and it depends.

Well, first, on the power density of the device. The light that hits your forehead needs to travel through quite a bit of skin and bone in order to reach your brain. The more powerful the device is, the more light is likely to penetrate and reach the brain.

(Fortunately, many red light therapy manufacturers provide you with some info on the power density of their device at different distances!)

In general, the less thick and dense the skull is, the more light will reach the brain. But significant questions remain unanswered.

Do you need more red and NIR photons? Less? The answer is simple: we don’t know yet...

Why Dosing Red Light Therapy For The Brain Is Currently Problematic

Let's take an even deeper dive the limitation of current studies:

Imagine a study found that for middle-aged men, delivering 30 Joules to the forehead from a device putting out 50 mW/cm2 was ideal to improve cognitive functioning.

If a young girl used a 50 mW/cm2 device to deliver 30 Joules to her forehead, this might result in a substantial overdose.

Why? Because a much higher dose is actually reaching her brain through her thinner skull.

Alternatively, think about if you tried to replicate these results with a device putting out only 1/10th of the power of the device used in the study: 5 mW/cm2 instead of 50 mW/cm2. Will you get the same results by using the device 10x as long, to deliver the same 30 Joules to the forehead?

That approach assumes that 1/10th of the amount of light is reaching the same brain tissue. But what if a 5 mW/cm2 device isn’t enough to penetrate through your skull and reach your brain at all?  Then it wouldn’t matter how long you used the device or what dose you applied to your forehead.

It’s also unclear at present whether the light actually needs to touch your brain in order to benefit mood and cognition. In other words, do you need to put the device right against your skull to get results or can a distance of a few inches with a higher power density be maintained?

There’s a hypothesis that there are cells near the surface of the head that can carry the benefits of NIR irradiation down into the brain. Irradiating the blood that is flowing into the brain might carry some benefits to the brain as well.

So, I’m going to look through some studies and pay attention to the power density of the devices they used, and the total energy they delivered to the forehead or scalp.

But what really matters is—probably—the energy delivered through the skull to the brain itself. And what if it isn’t just a matter of reaching the brain, but even the aim of reaching specific parts of the brain? In that case, devices with different power densities might impact different regions of the brain altogether.

To summarize, we need a better understanding of:

Until then, logically, recommendations can only be based on guesswork and estimates.

So I’ll look for studies that took note of the power density of the devices they were using. I’ll also find the treatment time, or energy density delivered to the scalp surface when possible. If your device has a lower power density, you should probably use it for longer.

If the device has a higher power density, you should probably use it for less time. The best you can do here is perform a calculation with your device to see how long it would take to reach the same energy density.

Now that you understand the issues with current red light therapy for the brain studies, let's move on to some specifc studies that have been analyzed already:

I’m going to consider only human studies for this particular topic. If a rat study finds cognitive enhancement from a certain light, its power density may be penetrating the rat’s entire brain, while barely touching the surface of a human’s—if at all.

Again, we don’t know what power density it would take for a light to penetrate an entire human brain in the same way.

Once I narrow down to:

After applying those criteria, we’re dealing only with a small number of studies compared to the vast body of research on red/NIR. Many studies just don’t clearly record the specifications of the lights they used.

And then there's another issue;

Why “Weak” Lights Appear To Be Effective

Here's my conclusion based upon several studies:

At the lowest part of the dosage spectrum, one study found 6.4 mW/cm2 for 20 minutes (for 7.68 J/cm2) improved brain blood flow and cognitive functioning in veterans with chronic Traumatic Brain Injuries. Another case study found that a patient in a vegetative state improved enough to begin moving his arm and hand to reach a tube after therapy with 11.4 mW/cm2 delivering 20.5 J/cm2 in total (3, 4).

So at that the lower end, benefits appeared with a device with 16.67mW/cm2 power density delivering 20 J/cm2. This study found that reaction time in healthy subjects treated with NIR improved by 23.8 milliseconds. Patients with chronic traumatic brain injuries also saw improvements from a 22.2 mW/cm2 device delivering 13.3 J/cm2 to the scalp (5, 6, 7).

Additionally, studies of the Vielight Neuro devices show that a 41 mW/cm2 power density delivering 24.6 Joules to the scalp (and 23 mW/cm2 delivering 13.8 Joules intranasally) is effective at improving cognition in patients with mild to moderately severe Alzheimer’s (8).

Lastly, note that Alex’s test of different full-body panels found a minimum power density of 46 mW/cm2 in the devices that were tested—at a distance of 6 inches. This would imply that, as long as you increase your treatment time enough, almost any light should do something.

Next, let's look at the higher end of the spectrum in terms of dosages:

The Common 250 mW/cm2 Figure In The Medical Literature

Let's finally look at some results that we can work with:

Let's look at some results with those numbers:

8 Minutes of treatment with a 1064nm light using 250 mW/cm2 to deliver 60 J/cm2 brought the same benefits to attention in healthy subjects as cardio. Another study found improvements to healthy subjects’ executive function (which are related to higher-order cognitive capacity). One more study concluded that this treatment protocol protects brain function and mood in university students who would normally take a big hit to both because of stress (9, 10, 11).

Yet another study, moreover, confirmed that exposure to 250 mW/cm2 for 10 minutes (150 J/cm2) increased oxygen delivery to the brain. A pilot study of 10 subjects found 4-minute treatments with a 250 mW/cm2 light significantly reduced symptoms of depression and anxiety (12, 13).

So overall, higher power densities lead to almost universal improvement across a wide spectrum of variables associated with brain health and performance.

Finishing Thoughts: My Reflections On The Current State Of The Evidence

A higher quantity of studies currently look at a fairly high power density (250 mW/cm2). But we don’t have any studies comparing higher and lower-powered lights. Even with the same energy density, a higher-powered light might have more benefits by hitting deeper structures in the brain.

Or, maybe, how far the light penetrates the brain doesn’t matter at all!

Nevertheless, extremely good reasons to think NIR benefits the brain do exist. But it’s too early to be confident about prescriptions for the optimal dosing strategy.

The safest bet given the limited evidence we have so far is to aim as close to 250 mW/cm2 for 4 minutes (60 J/cm2) as possible.

Nonetheless, you can reach reasonable high doses (100 mW/cm2+) by standing very close to a panel. If you're interested in the highest-powered panels on the market today, read Alex' The Best Red Light Therapy Body Panel to find out more.

Also, if you're interested in receiving direct access to additional studies on red light therapy for brain health, cognitive performance, mood, that are not treated in this blog post, sign up to receive the e-mail below:

If you're a geek and love studies, I highly recommend signing up above!

This blog post was written by Aedhán Castiel. Aedhán is a contributing writer for Alexfergus.com and is passionate about researching and testing innovative resources and sharing what he discovers to give you an edge in your pursuit of optimal functioning.