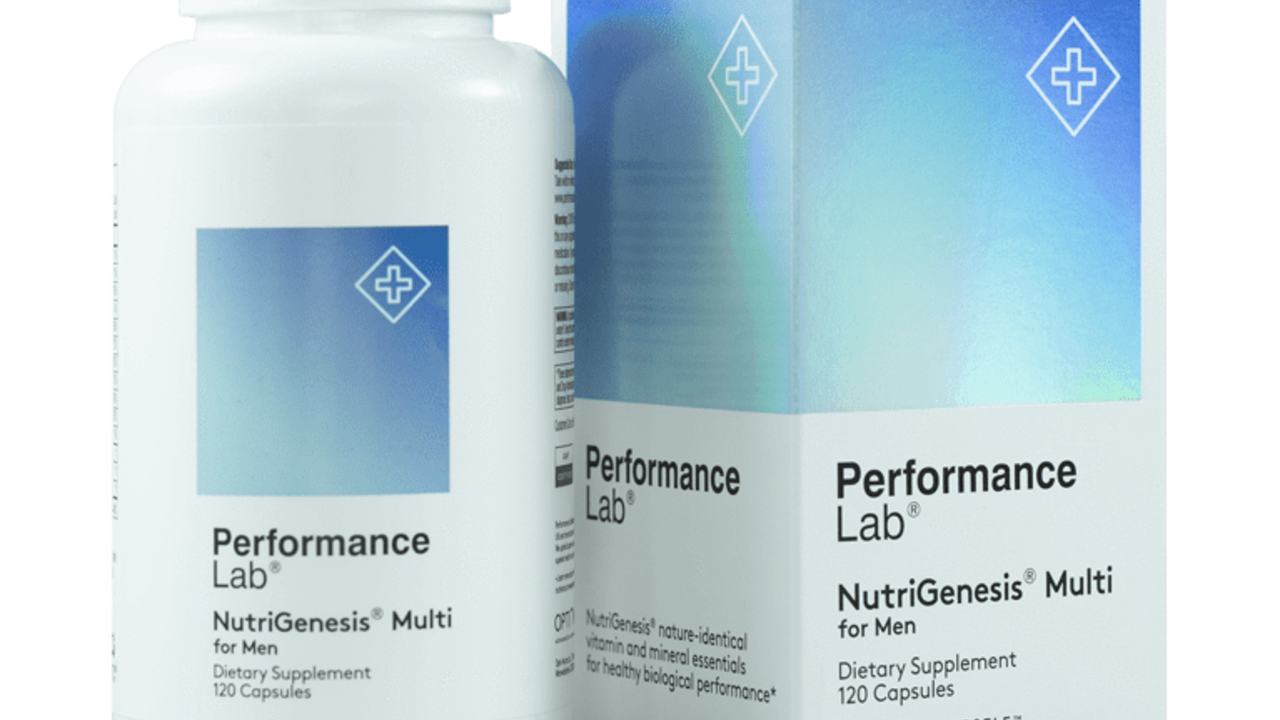 There's a decades-old debate in the health space that hasn't found any closure. That battle rages between people who think you should get all your nutrients from food and those who think modern-day food is woefully inadequate and needs to be supplemented.

Of course, the first supplement many people consider is a multivitamin. So today, I'm going to talk about that topic.

Fortunately, the multivitamin and mineral industry has also developed since the 1980s. Gone are the supplements with fillers, sky-high vitamin doses (such as 2,500% of the recommended Daily Value of vitamin B6).

Performance Lab contends to have created a product that leapfrogs the quality of previous multivitamins. One claim is that the Performance Lab Multi for Men - that I'm reviewing here - contains vitamins and minerals as they are found in food.

How valid is that claim though?

Stay tuned and read my assessment...

I've broken this review up in several sections. First I'll consider alleged difference between Performance Lab multivitamins and minerals and their production process, compared to regular offerings on the market.

Next, I'll talk about how strong the case is for taking a multivitamin and mineral as well as my personal experience taking this product.

In my conclusion, I take the 30,000-foot overview of this topic.

The Alleged Difference Between BioGenesis™ And Regular Multivitamins

The debate between natural and synthetic vitamins and minerals is decades old. I remember that almost 20 years ago, I was exercising intensely and my mom bought me a multi-vitamin and mineral supplement.

The argument back then was that "natural multivitamins" are better than synthetic ones. So she bought the "Solgar" brand that's still around today.

Most studies show there's either a very small or no difference between synthetic vitamin C or E and their natural counterparts (1; 2; 3).

That absence of a difference is usually explained by claiming that the chemical structure of Abscrobid Acid (vitamin C) is exactly the same for the natural and synthetic variants.

So the chemical structure of synthetic vitamin E, usually in the alpha-tocopherol form, is the same as its natural counterpart.

But that's just half the story.

Whenever you consume vitamin C from food - such as broccoli or orange juice - you're going to ingest many additional compounds besides just vitamin C.

That last point is key...

As a result, the Opti-Nutra™ company introduced a new process called BioGenesis™ (4).

Within that BioGenesis™ process, the goal is to create nutrients for multivitamins and minerals in such a way as to mimic the natural process.

(The BioGenesis™ process has been renamed into "NutriGenesis®" but my bottle uses BioGenesis™ so I'll include that term here.)

Substances like lactobacillus bulgaricus (yogurt culture), saccharomyces cerevisiae (brewer’s yeast), and other compounds are cultivated in a lab. These substances are given access to nutrients so that they can divide and grow in a natural manner.

The end result is that you don't only end up with nutrients such as B-vitamins or zinc or copper that's isolated, but you also get co-factors that you'd normally find in food. Such co-factors include enzymes, antioxidants, macronutrients, etcetera.

The final outcome, even though the process still takes place in a lab, should thus be more akin to vitamins and minerals you get from food.

Let me give an analogy to understand that principle: if you're drinking wine, you're ingesting far more than just alcohol: the grapes contain polyphenols, organic acids, water (that's potentially structured), glycerol, and more.

Hence, thinking of wine as just alcohol would be completely faulty. Many people make the same mistake when equating coffee to just caffeine. Coffee contains hundreds if not thousands of different compounds besides caffeine. Thus, comparing the two is short-sighted.

The same principle applies to vitamins and minerals: if you're taking vitamin C as pure Ascorbic Acid, then you're missing out on the other compounds in broccoli or orange.

So let's consider why you would want to supplement vitamins and minerals in the first place:

Should You Get A Multivitamin Or Mineral At All?

My answer: for most people getting a multivitamin or mineral is a great option.

Other deficiencies exist as well, such as choline or folate...

The simple truth? Even though people are more affluent than ever before in history, high-quality food is simply not a priority for most people.

Most people aren't even eating organic food, even though they are going on a holiday twice a year and own two cars. That's a fact.

If you're a person who has reasonable amounts of money to spend but you don't take care of your health as well as you could, a multi could be your solution.

Performance Labs also extensively talks about soil depletion as a cause of nutritional deficiencies today.

I second that assessment.

The Scientific American, the most prestigious magazine of popular science around, writes that:

"They studied U.S. Department of Agriculture nutritional data from both 1950 and 1999 for 43 different vegetables and fruits, finding “reliable declines” in the amount of protein, calcium, phosphorus, iron, riboflavin (vitamin B2) and vitamin C over the past half century. Davis and his colleagues chalk up this declining nutritional content to the preponderance of agricultural practices designed to improve traits (size, growth rate, pest resistance) other than nutrition." (10).

If you grow foods as quickly as possible and use chemical fertilizer that doesn't add all minerals back to the soil, then over time nutritional deficiencies develop in that soil. Depleted soils lead to nutritionally depleted-produce.

Humans are the same, of course, in that if you eat the same food (such as grains) over and over again without having many other foods in your diet, you're also going to be nutritionally deficient.

The method of growing as much food as possible on as little space as possible without regard to the soil is illusory at best (11).

Visually, it seems like you're getting more bang for your buck but every carrot or broccoli you eat simply has fewer nutrients.

Conclusion? Even if you're eating healthy foods, you're more at risk of getting nutritional deficiencies. Multi vitamins and minerals may help in that regard.

So let's jump back to the previous topic of Performance Lab Multi for Men:

Contrary to my reviews of anti-aging stacks or nootropics, I'm not going to review every single of the 26 ingredients in this particular supplement.

In reviews of Eternus or Mindlab Pro or Awaken Gold, I've regularly dissected the role of every single ingredient in that supplement.

The reason for not doing the same is that all 26 ingredients are common vitamins and minerals.

What do you see when looking at these vitamins and minerals?

Food versions of these minerals are thus fundamentally different than what you'd normally get from supplements.

Hence, Performance Lab can claim that they're offering a superior product.

Unfortunately, as of right now, no (high-quality) studies currently exist proving that Performance Labs' multis are better than generic versions.

Having said that, the account of food versions being superior is plausible though. Only time will tell though whether that account can be scientifically confirmed. For now, I'll give Performance Labs the benefit of the doubt.

But how about the formula?

Let's break that formula down further. Why? Well, different types of minerals and vitamins in different forms have varying biochemical effects:

Breaking Down The Formula

So what do I personally think of the formula?

Let's consider a few other things you might need to know:

Other Things You Need To Know

The Performance Lab multi is 100% vegan, free of GMOs, and doesn't contain any toxic fillers. That absence of any fillers is really remarkable and praiseworthy.

Hence, the product is very nice to use if you're a vegetarian and vegan, for instance, and cannot get all your nutrients from your diet.

Gluten and soy aren't included either, nor are most common allergens.

How about the price?

Right now, a one-month supply costs $39. If you buy in bulk, the price point will come down to about $30 per month.

Overall, prices are not that high. Of course, the question of whether these prices can be justified wholly depends on whether studies show the superiority of the vitamins and minerals in Performance Lab Multi for Men.

Overall, the value offered by Performance Labs is very good in my opinion.

Just like the male version, Performance lab also offers a women's multi. The formulation of that product is slightly different and geared towards, well, female health.

Folate levels provided are double of the men's multi, there's slightly more calcium in the female version (although in absolute numbers it's still negligible, 4 times the amount of iron is provided, there's a bit more magnesium and less zinc (which is good), and potassium provided is half.

Most of these choices are justifiable except for the higher iron levels. In postmenopausal women, higher iron intakes might lead to health problems down the road because the monthly cycle no longer removes iron from the equation. Additionally, I don't think supplemental iron should ever be used and I think the situation is more complex than simply adding more iron to the mix.

That account lies beyond the scope of the argument in this work, however.

Overall, the female version, despite me not actively testing it, is very good.

So let's, lastly, jump to my experience taking this supplement:

My Experience Taking Whole-Multi For Men

I have to be honest here, I don't experience much if anything when taking some supplements.

One example of a supplement I don't notice taking is Neurohacker's Eternus anti-aging stack, for instance.

I'm generally eating a very high-quality diet so I should be getting most of my nutrients every single day. Hence, I simply won't feel adding more nutrients if I don't have any (or few) existing nutritional deficiencies.

The same was the case when I was taking the Multi for Men from Performance Labs.

I will say, however, that if you're eating a low-quality diet then consuming this multi might lead to experiencing (consciously available) benefits.

My view of this product.

Finishing Thoughts: Bring On The Evolution Of Multi-Vitamins and Minerals

Whether Performance Lab Multi for Men is superior to other multivitamins remains to be seen.

I'd like to see some independent research with improved outcomes compared to regular multivitamins (such as those of Thorne or Life Extension) before drawing a conclusion.

Such studies can be expensive, however. Thus, some more limited in-house studies with 20 participants where their nutritional status is extensively tested might be more affordable.

Having said that, I do love the creativity and forward-looking approach of Performance Lab. All of their ingredients are of high-quality, the formulation shows that a lot of thought went into it, and overall quality control (such as no GMO or fillers) is excellent.

Do I recommend this multi for men?

As difficult as it sounds, I'd like to see more data first before recommending this product to others. Why? I cannot -- with good conscience -- recommend others spend their hard-earned cash on a product that doesn't have supporting clinical studies yet.

If a few people could check themselves for nutritional deficiencies at Letsgetchecked (use "ALEXFEGUS" as discount) we'd also get more data. It's up to you!